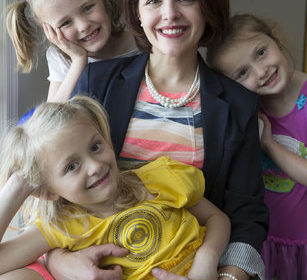 Lucy Horton a Delran, New Jersey resident says she could not believe what was happening.

Hours after she had called Delran’s mayor Ken Paris “unprofessional and unethical” on her Facebook page, a township police sergeant was on the phone, “informing her that if she didn’t take the Facebook post down, the mayor would be pressing harassment charges.”

Mr. Ken Paris, a two-term mayor seeking reelection this year, denies that he ordered the call.

The incident was the talk of the small-town of Delran, New Jersey. Ms. Horton not only refused to take down the post, she posted a new message describing the alleged police call, and denouncing Paris again.

This time she called him a “bully.”

Ms. Horton says, “I was a little freaked” when Sgt. James Mitchell called, said Horton, 37, a substitute teacher in the Delran district and mother of three. “I said, ‘What are my options?’ And he was very nice. Very kind. He said I could either take the post down or keep it up. And if I did, the mayor might file charges.”

Through his lawyer, Paris denied that he ever told Mitchell to call Horton.

“It absolutely did not happen,” attorney James K. Grace of Mount Holly said. “As a regular citizen wanting to protect himself, he consulted with the police department about his options. He did not direct him [Mitchell] to call.”

The kerfuffle began on May 10, when Pangia, 36, entered the courthouse in Mount Holly for a child custody hearing.

As Pangia passed through the lobby, she was surprised, she said, to find Paris walking in with her ex-husband, a friend of Paris’.

Paris “came up to me and told me I would see what a real political campaign looked like,” she recalled. “He said, ‘I’ll show you how we hit doors,’ ” and predicted she would lose the primary contest.

“For the mayor, it was just normal heckling,” said Pangia, a seven-year resident of Delran and a real estate agent. “He’s a boisterous and excitable guy. It’s his normal rhetoric to see if he can push buttons.”

But she was more surprised, she said, to discover Paris waiting for her outside the courtroom at the close of the 90-minute hearing. There, she said, he “razzed” her again.

“It didn’t really bother me all that much,” she said. “That’s just the way he is. He does that to residents who speak up at council meetings.”

Grace, Paris’ lawyer, said that his client’s encounters with Pangia at the courthouse were “friendly” and unplanned, and that he was there to meet with an architect to inspect the building’s exterior steps.

Pangia said she finds that explanation “curious,” since Paris works as a project manager for new construction at Rowan College at Burlington County. “What’s he doing inspecting steps for the courts?” she asked. “They’re two separate entities.”

When she mentioned her encounters to Horton, she said, her friend became incensed.

The next day on her Facebook page, Horton described Pangia’s two encounters with Paris at the courthouse, and called them “unprofessional and unethical” and “disgusting” in light of how stressful custody issues can be.

“This is who our real mayor is,” she continued. “I wasn’t going to post this for fear of retaliation, but I don’t care anymore.”

Then came the first inkling that police might be contacting her, in a text message from her 19-year-old friend Tyler Burrell. He is seeking a Democratic nomination for township council.

“I believe they are trying to get the police involved,” Burrell wrote in a May 11 message sent at 8:06 p.m.

“The police!” Horton replied. “I was unaware my Facebook posts broke any laws.”

Burrell told her he had told township officials he wanted to “stay out of it.” He did not respond to a request for an interview.

About 70 minutes after that text exchange, Mitchell left a voice mail message at Horton’s home, asking her to call the police station. (She later circulated the audio recording of the message to reporters.)

She said she returned the call minutes later and spoke to Mitchell, but did not record their conversation.

“Thank you Lucy for standing up for citizens everywhere to have freedom of speech and the press! I applaud you for keeping the post up in defiance of King Paris,” wrote one.

“He has gotten away with this for years,” read another.

“This post has been an eye opener. Tired of the bully,” read one more.

Michael Kulinski, who maintains the Delran Residents page, responded in an email that he “did not see anyone respond to her posts defending the mayor.”

Grace said his client would not take Horton’s accusations of misconduct lightly.

“We are examining our options under law and equity,” he said. Asked what those were, he replied that he was “not at liberty to discuss,” adding, “but I believe my client has options.”