Welcome to Delran’s Cop Watch. We will post all wrong doing by Delran Police and surrounding departments. We must hold these “Policy Enforcers” accountable.

There are many good cops out here and due to the recent disarray of the violent police murders on the people, we must be more observant and cautious when dealing with cops. Know that we have the power to hold them to their oath and their bond.

This is why we MUST use our best weapon which are our cellphones.  So start using it to record whenever you see anyone pulled over by a cop or you yourself are being in a situation with a cop, aka Policy Enforcers record the situation because it’s your word against theres.

Remember violence is not the answer. We must give respect and if we don’t get that in return we can then file complaints against the uniform men and women with Internal Affairs.

Do You Know Your Rights?

What Corrupt Politicians and Lawyers Don’t Want You To Know About Traffic Courts!

The United States Supreme Court (North America) Article III Section I of The Constitution for The United States of America Republic; vested Judicial Powers, and the establishment of inferior Courts:

Section I. The judicial Power of the United States, shall be vested in one supreme Court, and in such inferior Courts as the Congress may from time to time ordain and establish. The Judges, both of the supreme and inferior Courts, shall hold their Offices during good Behavior, and shall, at stated Times, receive for their Services, a Compensation, which shall not be diminished during their Continuance in Office.

Whereas, there is no question that a “Bench Summons”, a detention, an arrest, a ticket or citation, issued by a Police Officer or by others for parking or traveling with no driver’s license, a foreign driver’s license, no current registration, or no mandatory insurance, etc., which carries a fine or jail time, is a penalty or sanction; and is indeed “converting a right into a crime”, thus, violating substantive rights. It is reasonable to assume that the Court’s judicial decisions are straight and to the Point, and that there is no lawful method for government to put restrictions or limitations on Rights belonging to the people. The right to own and to possess Private Property and Personalty, and to be secure in those rights, is preserved and secured for the people and the citizens, by the Constitution. Government does not give rights, for it has no rights to give or to sell, nor to license. Government is put in place to protect and to secure the preexisting, Inalienable Rights of the People and the citizens.

United States Constitution – Amendment 4: The right of the people to be secure in their persons, houses, papers, and effects, against unreasonable searches and seizures, shall not be violated, and no Warrants shall issue, but upon probable cause, supported by Oath or affirmation, and particularly describing the place to be searched, and the persons or things to be seized.

Article VI, Clause 2 and 3 of The United States Constitution

Clause 3: The Senators and Representatives before mentioned, and the Members of the several State Legislatures, and all executive and judicial Officers, both of the United States and of the several States, shall be bound by Oath or Affirmation, to support this Constitution; but no religious Test shall ever be required as a Qualification by any Office or public Trust under the United States.

1. The Right to Travel; The Right to Mode of Conveyance; The Right to Locomotion are all absolute rights, and the Police can not make void the exercise of rights. State v. Armstead, 60 s. 778, 779, and 781:

3. The right to Park or Travel is part of the Liberty of which the Natural Person, citizen cannot be deprived without “due process of law” under the Fifth Amendment of the United States Constitution. Kent v. Dulles 357 US 116, 125:

4. The Right of a citizen to Travel upon the public highways and to transport one’s property thereon, either by carriage or automobile, is not a mere privilege, which a City may prohibit or permit at will, but a common right, which he / she has under the right to life, liberty, and the pursuit of happiness. Thompson v. Smith 154 SE 579:

7. Traveling in an automobile on the public roads was not a threat to the public safety or health and constituted no hazard to the public, and such a traveler owed nothing more than “due care” (as regards to tort for negligence) to the public and the owner owed no other duty to the public (eg. State), he / she and his / her auto, having equal rights to and on the roadways / highways as horses and wagons, etc.; this same right is still substantive rule, in that speeding, running stop signs, traveling without license plates, or registration are not threats to the public safety, and thus, are not arrestable offenses. Christy v. Elliot, 216 I 131, 74 HE 1035, LRA NS 1905 – 1910: California v. Farley 98 CED Rpt. 89, 20 CA 3d 1032 (1971).

8. Under The United States Republic’s Constitutional system of Government and upon the individuality and intelligence of the citizen, the state does not claim to control one’s conduct to others, leaving one the sole judge as to all that affects oneself. Mugler v. Kansas 123 US 623, 659 – 60:

9. Where rights secured by the Constitution are involved, there can be no rule-making or legislation, which would abrogate them. Miranda v. Arizona 384 US 436, 125:

11. For a crime to exist, there must be an injured party (Corpus Delicti) There can be no sanction or penalty imposed on one because of this Constitutional right. Sherer v. Cullen 481 F. 945:

12. If any Tribunal (court) finds absence of proof of jurisdiction over a person and subject matter, the case must be dismissed. Louisville v. Motley 2111 US 149, 29S. CT 42. “The Accuser Bears the Burden of Proof Beyond a Reasonable Doubt”. 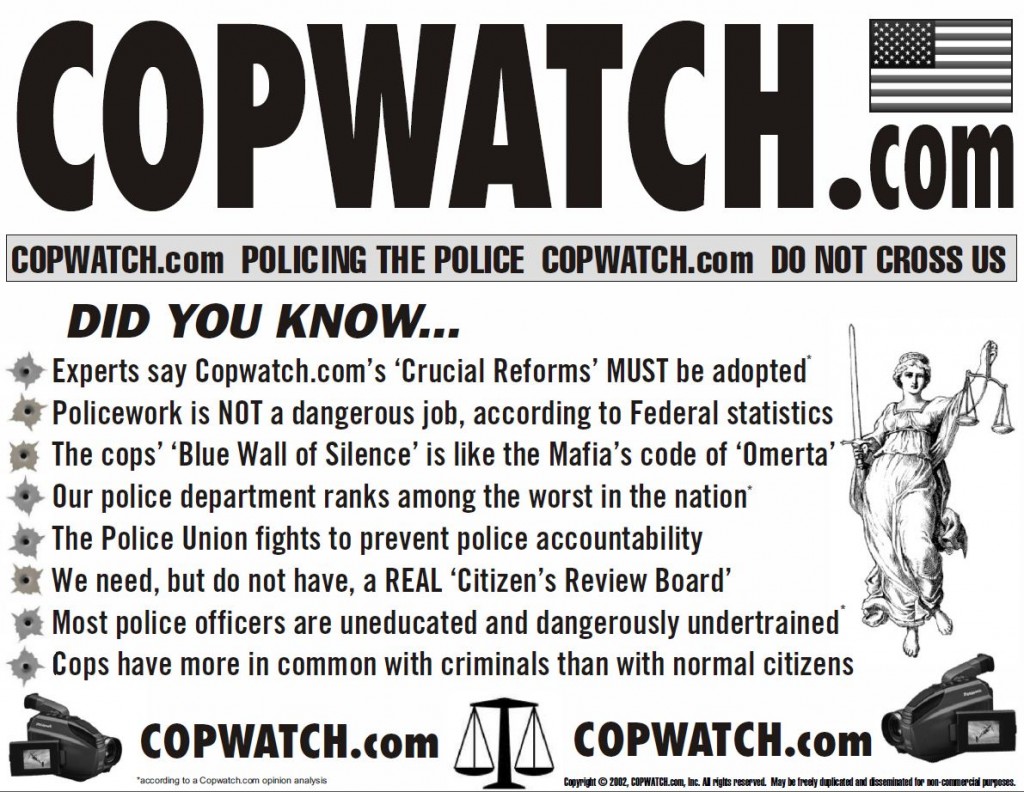 Cop watch with us and expose those goonies