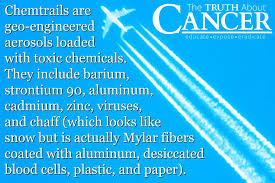 Why is the local and national governments allowing chemicals to be sprayed daily 24/7 in our skies?

Chemtrails have been the subject of intense media scrutiny for quite some time now. Those who’ve dared to go public with their knowledge of atmospheric engineering efforts — and even those who are simply bold enough to ask questions on a public platform — have been skewered by the propagandist mainstream media. Indeed, anyone with the gall to question what’s clearly going on in the skies above is inherently labeled a “crazed conspiracy theorist.” Anything will be said to discredit reality, it seems. But a hard look at the facts shows that geoengineering is nothing new — it’s real, and it’s been going on for a very long time.

Writing for Waking Times, writer Julian Rose explains that in 1975, the U.S. government patented a dispersion method for what were called “powdered contrails.” These contrails were designed to reside in the atmosphere for lengthy periods of time.

Years later, the word “chemtrails” itself would appear in government documents. Rose reports that the U.S. Department of Defense actually used the word “chemtrails” in the title for a manual provided to pilots training in the US Air Force Academy in 1990. According to Rose, this manual actually teaches you how to make the aerosol sprays we call “chemtrails.”

And as Natural News writer JD Heyes reported in 2016, NASA itself has admitted to spraying lithium into the atmosphere on-and-off for decades.

The “conspiracy theory” isn’t looking so much like a theory anymore, is it? Indeed, chemtrails and other geoengineering efforts are a reality — even if the propagandists want you to believe otherwise.

But how long has chemtrailing been going on? Well, Rose reports that aerosol spraying efforts have been underway for nearly sixty years. Some of the earliest incidents include cloud seeding attempts during World War II and the 1960’s Vietname invasion. In the 1980’s, atmospheric engineering became a full-fledged military project named “Environmental Modification Weapon” or “En Mod.”

However, under a 1987 United Nations ruling, the U.N. Convention on the Prohibition of Military or Any Other Hostile Use of Environmental Modification Techniques, such practices were banned. But, the ban isn’t really stopping anyone. As Rose notes, nowadays officials are propping up their pro-geoengineering argument by claiming that aerosol sprays and other techniques can be used to help battle climate change.

Further, the mass spraying of chemtrails has continued on without a single hitch — and those that have dared to speak up have been put through the ringer.

Last year, an EPA whistleblower revealed that he was fired by the EPA after raising concerns about the use of aluminum in atmospheric geoengineering.

Michael Davis reportedly worked at the EPA for 16 years before being given the boot. He commented, “I was terminated as a public servant performing a public service for raising the issues of anthropogenic deposition of aluminum due to atmospheric geoengineering.”

But aluminum isn’t the only thing being dispersed into our atmosphere. As Rose reports, barium and strontium are two elements that have also been identified via water samples — both of which are capable of highly disastrous effects on the brain and other organs. [Related: Read more stories about atmospheric geoengineering at ChemtrailsNews.com.]

There is no shortage of evidence that chemtrails are real — and dangerous. What do you believe?